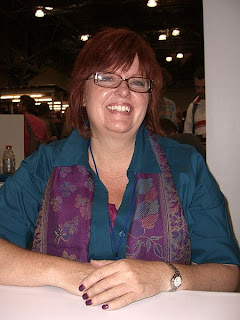 In a world filled with assholes, douchebags, and scoundrels, DC Comics decided to make a solid run for Dick of the Week by firing Gail Simone. If you don't know who Simone is, run, don't walk, fucking run, to your nearest comic book store and grab any issue of Batgirl produced during the New 52 era. I personally recommend the recently-released Batgirl Annual #1. Got it? Awesome, isn't it? Well-written, well-plotted with characters you really care for and empathize with, right?

Yeah, DC decided to shit-can her. From one of the more popular titles out right now. Via e-mail.

Unless Santa Claus gives an orphan the finger while kicking a puppy, DC could have that Dick of the Week title wrapped up. I'm writing this as a fan and not as a comics insider because 1) I'm a fan, and 2) I'm not a comics insider and as a fan, I think what DC did was bullshit. 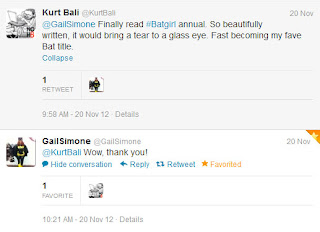 (Yeah, she responded to a compliment I gave her, so we're pretty much besties.)

Simone has been at the helm for some of the best, and underrated, comics in recent years for DC, including Birds of Prey, Wonder Woman, and Fury of Firestorm. Her work on Marvel's Deadpool is, in my opinion, the catalyst for making that title one of the most popular in the Marvel Universe. Wade Wilson went from a meh character with corny one-liners to an anti-hero spewing laugh-out-loud comments that were cringe-worthy in their darkness and inappropriateness.

On the flip side of that was Batgirl, a book that has all the bang-pow superhero stuff you could ask for, but also provides a back story worthy of one of the most interesting characters in the DC Universe. Something of a fringe character in the past, Alan Moore's The Killing Joke put her in the limelight when the Joker put a bullet in her spine and paralyzed her. No longer able to be Batgirl, Barbara Gordon became Oracle, the eye in the sky for Batman and the Bat Family as well as the leader of the Birds of Prey, a female group consisting of such super heroines as Black Canary, the Huntress, Lady Blackhawke, and others. 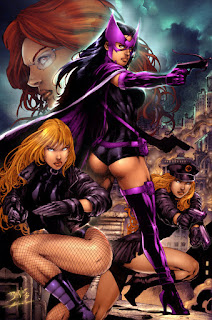 (Don't. Just don't. Be a grown up. Photo by ComicVine.com)

Simone's run on Birds of Prey was very notable in that since it was a comic about women written by a woman, it would be, well, all girly and shit. They would talk about boys and, er, women stuff, and it would be unreadable. Nope. Not even close. In fact, it was reading some of the trade paperbacks of BoP at my local library that convinced me I should give Batgirl a shot when the New 52 kicked off. I already had all the Bat titles plus Justice League in my pull file at my local shop, but after reading Batgirl #1, I was hooked.

So. We have cred with the fanboys in a male-dominated field, a book that is popular in aforementioned field, and a legion of fans who went absolutely batshit (pun intended) on Twitter Sunday when Simone confirmed she had been given her walking papers. Via. Fucking. E-mail.

Sports fans will remember this. Remember when Jimmy Johnson, formerly a championship coach, now an analyst and spokesman for big-dick pills, won his second-straight Super Bowl with the Dallas Cowboys and Jerry Jones, prior to his permanent impersonation of the creepy preacher from Poltergeist 2, fired his ass? This is kinda like that, but different.

It's like that because there's an obvious analogy to be made between the two instances and different because I love what Simone has done with Batgirl and abso-fucking-lutely hate the Dallas Cowboys. I taught my son when he was four years old that the Cowboys set fire to kitten rescues on Christmas Eve. Truth hurts sometimes. I bring up the Jones/Johnson situation because of this: Rumor has it, there was some friction between Simone and her editor. Obviously, I don't know for sure but if the internet says it...

Anyway, the point I'm laboring to make is, if you're successful, you bust your ass to get along. It doesn't matter if you literally fucking hate that person to the point you wish their grandparents would come back to life so you could kill them all over again, you make an effort to get along. Batgirl is a magical title and it's because of the combination of Simone and Ardian Syaf (pencils) making it thus. I'm not saying you should suffer assholes gladly, but if I'm Simone's former editor and she walked by my desk, knocking my coffee cup off my desk daily and giving me wet willies in front of my kids, I'd suck it up a little because you're part of a profitable team and, in the end, that reflects on you. Plus, I'd teabag the shit out of her laptop when she wasn't looking. But I'm passive-aggressive that way.

Monday's news from Simone was much more positive as some of the biggest names in comics, such as Neil Gaiman and Batman's Scott Snyder, coming to her defense on Twitter. The lady herself made several comments, basically saying she's receiving a ton of offers that are actually more lucrative than her gig on Batgirl. She also said she's spoken with the heads of DC and they have told her they are sorry things ended the way they did and there was some miscommunication between the firer and the firee i.e. they shit-canned her without getting their ducks in a row first.

I'd like to say I'm not going to read Batgirl or any DC Comics titles anymore. Based on things I've read, they probably deserve it. While I enjoy the New 52, it was done (allegedly) against the wishes of most of the creative staff and according to a panel I attended with Denny O'Neil, comics are a brutal business no matter where you are with constant power plays between the creative teams, the editors, and the publishers where the biggest losers tend to be the fans. Kind of like this situation, for example.

I'm still going to read DC Comics. And Batgirl. At least for awhile. Simone's final issue is #16 at the end of the "Death of the Family" arc with the Joker and the other Bat titles. Batgirl was special because it was believable. Suspension of disbelief is hard to achieve sometimes, but Simone made it easy. You liked Barbara. You pulled for her. You felt her pain, her confusion, her fears of being put back in that damned chair. Prior to this, the closest I've felt to a character was Kitty Pryde in the X-Men of the 80s when Peter Rasputin told her he didn't love her anymore because of his feelings for Zsaji, the healer he met on Battleworld during the Secret Wars arc. Chris Claremont handled that amazingly and it left a lasting impression on me, both as a comics fan and as a writer. That is what Simone has done with Batgirl.

So Gail, I'm still going to read Batgirl. And other DC Comics. But I'll be thinking of you. Anyone that comes along, no matter how good, will just be a silver medal.
Posted by Kurt Bali at 9:03 PM 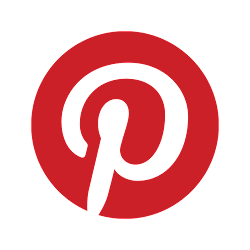 Look at my stupid pictures!

Get posts in your e-mail!

The top Web sites of the last 100 years